The annual migration of the gnus in the Masai Mara – Serengeti eco-system are ancient patterns of migration due to sheer survival defines this unique savanna ecosystem of extreme varied diversity and splendour so that some of the greatest writers in the world like Hemingway and Karen Blixen would spend many years of their life exploring East Africa in order to write their fabulous books from here.

The migration takes place every year from July to October, a migration so immense it is called the Great Migration and can include as many as 1,300,000 Wildebeest, 360,000 Thomson’s Gazelle, and almost 200.000 Zebras.

Unfortunately for some of the weaker animals, the migration route cuts right across the Mara River, and if not drowned and eaten by some of the huge old Nile crocodiles in the river, other predators await them in the thickets on the river banks, ready to attack at any given moment.

The annual migration allows huge number of herbivores to give birth to their young ones in a location with plenty of food. One of the advantages in being many is that the camouflage effect of the flock makes it more confusing for the predators to seek out the right target. 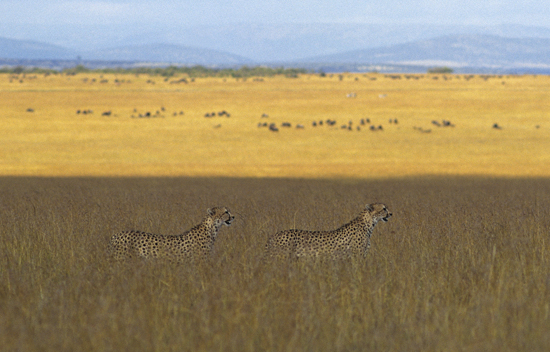 The Nile Crocodile grow all their life and can reach 5-6m in length and a massive 1m over the back. Older crocodiles like this one weighs in at about one ton and can easily go for a year without food which means they can just lie and wait for their next meal untill the annual migration of gnus passes the Mara River. Photo © Mikkel Alexander Grabowski

Nile Crocodile on the bank of the Mara River awaiting the great migration of the gnus for the next feast. Photo © Mikkel Alexander Grabowski

Contact us for any inquiry about your next safari in Africa: